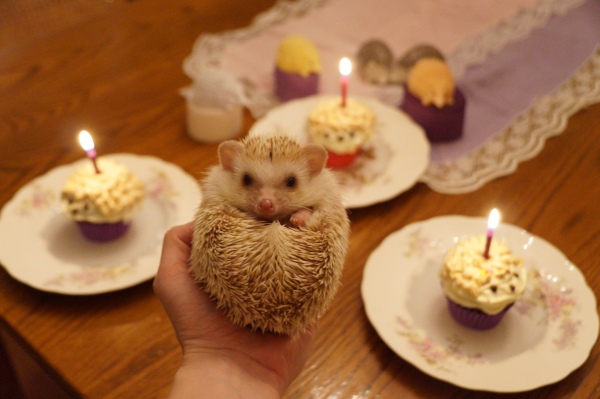 On my prayer list for August 2016 is listed a petition for a miraculous appearing of a pet hedgehog. It may have been a bit facetious, but God was listening.

About a month later, I was praying about something else and randomly opened my Bible. My eyes landed on Isaiah 14:23: “I will make it a possession of the hedgehog….” declares the Lord of hosts.” (ESV)

God was responding to my prayer for a pet hedgehog! Never mind that the context of the passage was about God bringing justice to those who had been mistreated by making their attacker’s land desolate and filled with hedgehogs, a desert creature. He was bringing His Word to life in response to my childlike prayer.

I started saving and researching hedgehog breeders. The only thing was, I really wanted a blonde girl hedgehog. I’d had a traditional salt-and-pepper (white with black bands) boy hedgehog as a child and wanted to mix it up. Blonde hedgehogs are not albinos; their quills are white with cinnamon and ginger colored banding due to a recessive gene, just like blonde-haired people.

I decided to sign up with a breeder that would put me on a waiting list for the next blonde girl born. I inquired with Otsego Hedgehogs in Minnesota a few days before my birthday in January 2017. I got on the waiting list a few days after my birthday. I knew it could be months since they couldn’t guarantee when another blonde girl would be born. Also, quill color and sex are not determined until the baby hedgehogs are a few weeks old.

But a couple weeks later the breeder sent me a text saying that it appears there were two blonde hedgehogs born in a litter of four January 29.

That was my birthday!

A week later, she let me know they were girls. I picked up my Ginger a few weeks later, a tiny prickly ball of a miracle.

The playful way that God answered my childlike prayer for a miraculous appearing of a pet hedgehog is something that reminds me that He is listening when I am waiting for answers to more difficult things.

He might not always answer our prayers in the way or the timing that we would like, but we can be sure He is listening and cares about us in a way that we can’t fully comprehend.